Hello! This is Anthony Gaughan for Teacher Training Unplugged Radio. In this episode I’d like to talk about focusing on form in the language classroom, and how not to waste time on it. Let’s get started…

Quite often when people try to teach grammar, they make one or two things hard for themselves, and their students. One of these is thinking that in order adequately to analyze a grammatical structure, you need to label its component parts, particularly using jargon or technical terms.

Let’s assume that students need to know two basic things about any given new structure in order to start to use it: what it means and how it’s made (we could add how it sounds, but that’s a kind of subclass of how it’s made, so let’s leave that for now). Let’s further assume that what it means has already been clarified and understood.

The next job for a teacher is to help the students understand how to construct this structure, how to replicate it.

For many teachers, this begins with an example sentence on the board (e.g. I have been to India), which they then proceed to break into its component parts, labeling them as they go along: subject – auxiliary HAVE – past participle/3rd form verb. 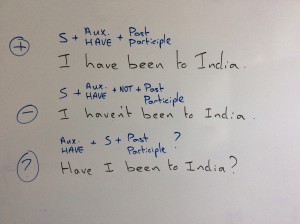 In a “student-centred” classroom, instead of the teacher simply declaring this information, the students may be involved in this process, with the teacher pointing at each item in the example in term, and asking “and this is (the)…?”, in the hope of eliciting these technical labels from the students.

This approach is frequently successful in eventually generating a formally accurate analysis of the target structure, but it tends to take a long time, be quite repetitive in terms of the information elicited, and crucially, it does not seem to contribute a great deal to students actually performing any better in subsequent controlled practice.

There may be many reasons for this, but for now I’d like to simply ask why it is that teachers, especially novice teachers or those on initial training courses, feel that this kind of thing is necessary at all.

Firstly, and most obviously, it is because a candidate’s ability to “clarify meaning, form and phonology to appropriate depth (criterion 2e in the Celta framework) is something they are expected to be able to do and must therefore demonstrate. But there is nothing in this criterion that demands a labeling of form, merely a “clarify(ing)” of it.

So if using jargon is unnecessary for assessment purposes and ineffectual in revealing useful patterns, what alternatives to it are there?

One is to think in terms of drop down menus, like a computer program menu bar. At each point along the utterance, imagine a drop down menu opening up wherever there is something that could be varied or exchanged for another example of the same type. So, taking our earlier example, and assuming the various personal pronouns are already strongly acquired, our attention would stop first at HAVE, and we would open up a drop-down below this to include HAS.

Thus we end up with S + HAVE/HAS

Then, when we move to the main verb, here in its past participle form, we open a drop down list and add 2-3 further examples (say climbed Mt. Everest/gone shopping in New York/eaten lobster/worked for an international company) By choosing 2 regular verbs and 2 irregular verbs, we present adequate data to suggest the underlying rule of form, which we can then check with simple questions, unless we haven’t already tacitly done so by eliciting the participle form from students by cuing with the base form, thus killing two birds with one stone.

Once the positive form has been unpacked in this way, the negative only requires those slots to be covered that are different. So in our example, we only have to establish a slot for the negation – all else remains equal so there is no point in ploughing the same furrow over and over again.

The same applies for the question form – once the inversion has been established, the work is essentially done. 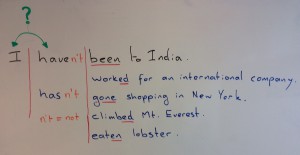 In this way, an analysis of form should usually be a matter of diminishing detail, rather than increasing.

Once students have noticed the kind of thing that needs to go into any given slot, assuming they are clear about the overall meaning that the completed structure conveys, there is no need for them to know or to enunciate the technical label for it. Much like competent drivers have little to no idea what most of the technical markings on the roads are called, they are still able to respond to and interact with them perfectly safely and effectively.

(This is why road theory tests with questions asking for road features to be labelled are a total waste of time, and why it was grossly unfair that I failed my theory test first time on the basis of getting such a question wrong. But I digress…)

Apart from the relative economy and lack of need to be au fait with jargon, what other benefits are there to this approach? Well, as I see it, there are a couple:

1) instead of non-generative labels, students get more ready-to-use language
By providing 3-4 possible utterances, we are adding to students’ resources in a useful way. These utterances can be put to use in controlled practice or communicative practice later in the lesson, if well chosen, and thus serve at least a double purpose, of illustration and arsenal.

2) it emphasizes the concrete nature of language, not the abstract algorithms underneath
While I appreciate the elegance of a syntactic tree diagram as much as the next man, I’ve never found them especially useful for learning language, because they look so little like language doing its normal thing. A straightforward set of examples, with the key elements highlighted and presented so that the patterns stand out works much better for me, and I suspect for most people.

So if you are one of those teachers who, like me, sometimes feels like the focus on form stage in a lesson gets a bit too abstract for anyone’s good, then give this a try and see how it works for you. Any comments, queries, disagreements or death-threats, feel free to leave a comment below.

In the next episode, I’ll be talking a little about some of the challenges in understanding published materials, and how to overcome them.

Til next time, this is Anthony Gaughan, for Teacher Training Unplugged Radio, saying thanks for listening, and goodbye.

(Note: I will add whiteboard images to illustrate this shortly, so if anything isn’t clear from my description, check back later!)

All the other stuff