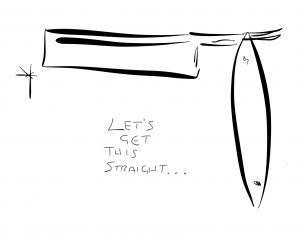 Note to the reader: this post originally appeared on the IATEFL Teacher Development SIG website. As a year has gone by and I like having stuff in one place, I’m republishing it here.

I recently started shaving with a straight razor.  No, this isn’t going to be a post about how manly I am.

It’s going to be about how I decided to make this change, and what this has to do with my becoming increasingly mistrustful of innovation as a force for positive educational change.

I realise I was fortunate, in retrospect: I am old enough to have a father who shaves regularly with an old-fashioned safety razor.  Some of my earliest product allegiances were formed watching my father unpack Wilkinson Sword double edge blades and splash on Old Spice aftershave.

More importantly, I got to witness what was, I know now, a ritual.  The way my father would go about this daily task never changed, and it always produced the results he seemed to want, in a straightforward and easy manner.

Naturally, I wanted to grow up to be just like him.  So, as soon as my pubescent growth would allow it, I tried my hand at shaving.  I imitated my father exactly, and learnt two things very quickly: first, there is nothing quite so effective at focusing the young mind than taking a razor to one’s throat, and second, shaving, to be done well, is a first and foremost a matter of practice and also having good, basic tools.

So I practised, and over time I became good.  Never as good as my father, I thought, but good enough for me.

Then I went to university and lived with people other than my family for the first time.  Bathrooms full of other people’s stuff.  What caught my attention was the other guys’ shaving gear.  Gillette Mach 3, Braun electric razors – stuff I’d seen on TV but never seriously thought anyone actually used.

Naturally, I became curious.  In the following years, I collected all manner of new, improved system razors – ones that had two blades, three blades, even four blades; blades diamond-coated and allegedly so sharp they had to be kept “behind bars” (remember those?).  I tried them all.

But each time I tried what I thought was the last possible refinement in men’s grooming, out came a new one: this time battery-powered, this time vibrating (not a quality I’d ever considered desirable in a razor, but obviously someone had thought it would be a good idea.).

It was exhausting, both mentally and financially.  After a while, I did the only sensible thing: I gave up.

Basically, I came to realise three things: one, the flood of innovation was never going to stop because it was lucrative for someone else, and two, none of the shaves I’d experienced as a result of any of these innovations had been any better, easier or cheaper than the one I used to get from my dad’s old safety razor, so I was paying in more than just money.

Third, and crucially, it wasn’t enjoyable anymore.  It wasn’t pleasurable.  It didn’t make me look forward to doing it again tomorrow.

There was no ritual to it.  At least, no sense of ritual.

So I went back and dusted off (or rusted off) my old razor and went back to basics.  It took a while to get back into the habit, but everything felt so much better.  And the results were better.  Fewer cuts, less razor burn, cheaper.

I could have considered case closed at this point, but a question had started to form in the deep recesses of my brain.

If a simple double edge safety razor can out-perform all the new developments that Gillette and co. have to offer, was it possible to step even further away from innovation, really go back to basics, and get improved results?

So I bought a straight razor.

So simple.  So effective, so challenging and yet so easy.  The closest, most enjoyable shaves of my life.  And fewer nicks and cuts than with any other kind of razor,  The irony was that I’d always thought that straight razor shaving had fallen out of fashion because it was too complicated and expensive; actually the opposite is true.  Every innovation in this area made this basic necessary routine more resource-intensive, more wasteful, more costly and less effective than it had originally been.  The perfect hoodwink.

What does any of this have to do with education?

Innovation and efficacy are big at the moment.  The EdTech movement of today is filling the space that the courseware bloat of yesteryear had occupied in discussions of the direction in which our profession is moving.  The discussions of tomorrow will increasingly be, or be pushed towards being about efficacy or other non-concepts designed to promote not learning, but product sales.

I think this is a problem.  First of all, it is, I suspect, leading to a massive waste of resources, both in terms of raw materials and human labour.  Second, I suspect it is leading to an enfeeblement of teaching skills of the kind that actually matter.  Third, I suspect it is driven not by serious educational ideals but by financial motives.  Finally, and crucially, I think it is taking the fun, the ritual, out of education.

But I think it is worth remembering that in education, as in shaving, an innovation is not necessarily an improvement.  For an innovation to be an improvement, it has to meet two simple criteria: it has to be a solution to a real problem, and it has actually to improve things.  Buying into anything else is being hoodwinked.

Let’s avoid being hoodwinked, if we can, and instead of buying into the latest innovations simply because they are sold as innovations, let’s rather focus our talents towards becoming practised once again in making good, practised use of basic tools.