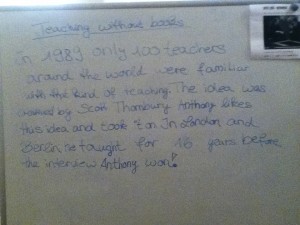 A couple of days ago I taught a short (35 minute) lesson to the teaching practice students on the CELTA course we are running in Hamburg at the moment.  I had used a personal story to introduce the structure “used to” and, while setting up some controlled practice, I had told the students that I used to have long hair.

Several of the students didn’t believe me and demanded to see photographic evidence.  This demand led to one of the most enjoyable lessons I have ever been part of.

I searched for a photograph where my old ponytail could clearly be seen, but the best I could find was a still screenshot from an interview I did with Andi White at IATEFL 2011. 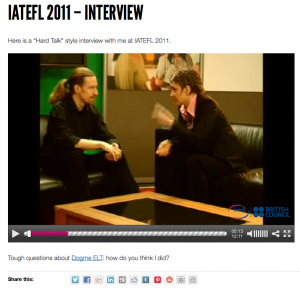 I had only intended to show this and move on to doing something else entirely in the lesson, though.

When I came into class the students asked if I had photographic evidence and I whipped out the picture.  I pinned it to the whiteboard and invited the students to come and look at it.  Some students were amazed at how different I looked – which  led to teaching them mustache, beard, goatee, and I wouldn’t have recognised you!

Then one student said “you’re famous.”  I asked her why she thought so, and she pointed out the British Council logo and said that it looked like a video online.  I confirmed this was true and invited other questions.  A different student asked me for the name of the interviewer, and – working with the whole group, we got the following on the board:

I checked the students understood that although the questions were different, the answer they got would be the same.

Then I asked the students to continue asking me questions, but on paper.  I organized teams of four and assigned a group scribe, and a “runner” to pass me the questions when they were hot off the press.  If the question was well-formed I would answer; if there was anything technically wrong with the question I would highlight this and they should revise it.

Then we set to work.  I had envisaged 5 minutes for this stage but it took closer to 15, partly because one team was very productive in their questions while the other were more thoughtful and cautious, and so needed more time to gather information, but also because I was fascinated by the line their questioning took.

I had imagined they would ask about logistical matters like where I was at the time, etc, but quickly their questions turned to the topic of the interview.  This led to them interviewing me about the history of Dogme ELT (“teaching without a coursebook”) and my relationship to it.

Here are the questions with my answers:

Here are the originals: 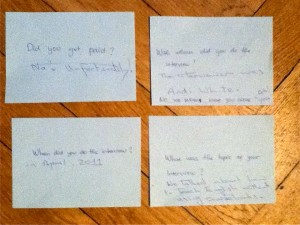 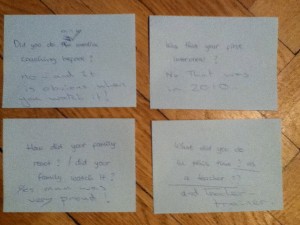 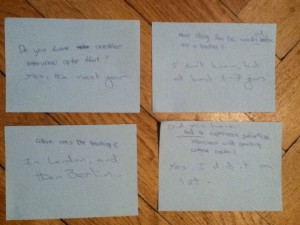 With about 10 minutes to go, I pulled the whiteboard into the middle of the room and passed a board pen to each team.

“Write a short story with the answers you got.  You don’t need to use everything – choose the information you want.”

The students worked together, swapping between English and German in order to find the best phrasing for what they wanted to say (reminiscent of Community Language Learning, recording to the board instead of a voice recorder.)

In the end, these texts emerged: 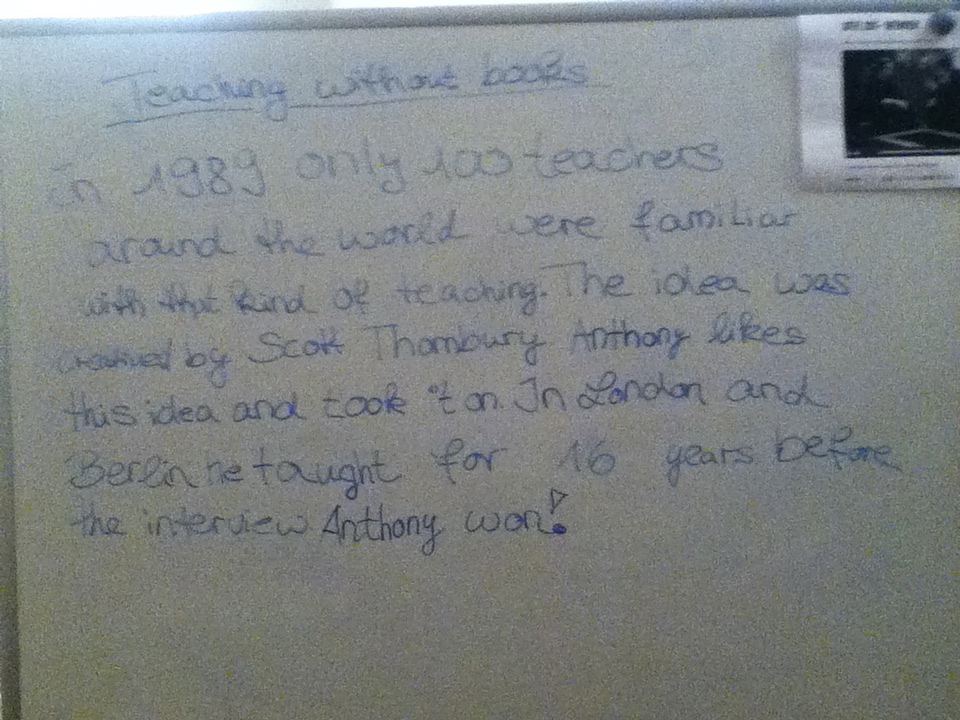 In 1989 only 100 teachers around the world were familiar with that kind of teaching.  The idea was creatived by Scott Thornbury.  Anthony likes this idea and took it on.  In London and Berlin he taught for 16 years before the interview.  Anthony won!

The interview took place in April 2011 in Brighton, UK.  The interviewer’s name was Andi White and Anthony was the only interview guest.  They talked about how to teach English without using coursebooks.  This interview is found in the British Council IATEL 2011 Conference website.  The viewer is about 3000 and Anthony’s mother was very proud but unfortunately he didn’t get paid! 🙂

What struck me was how little the students needed me, despite the amount of recasting and recompositioning of my answers they were doing while composing their own texts.

One group asked me for the English word for vertraut – initially I thought they meant trusted, as in a trusted colleague, but they corrected me and said no, I mean when you know something, and that helped me give them to be familiar with.  I also pointed out a missing apostrophe (which the group had suspected they needed anyway) and removed an S on the end of took (which the scribe had suspected he didn’t need anyway)

Reading the stories was very moving, and I thought that the two people mentioned in the story – Scott Thornbury and Andi White – might like to see the outcomes, so here they are.

Scott, you will see your fingerprints all over this one – Andi, this reminded me how much I enjoyed sparring with you (and sorry for saying I won the argument 😉 )

Andi, Scott, if you have the time, I’d really appreciate it if you could quickly write back to my students!

All the other stuff